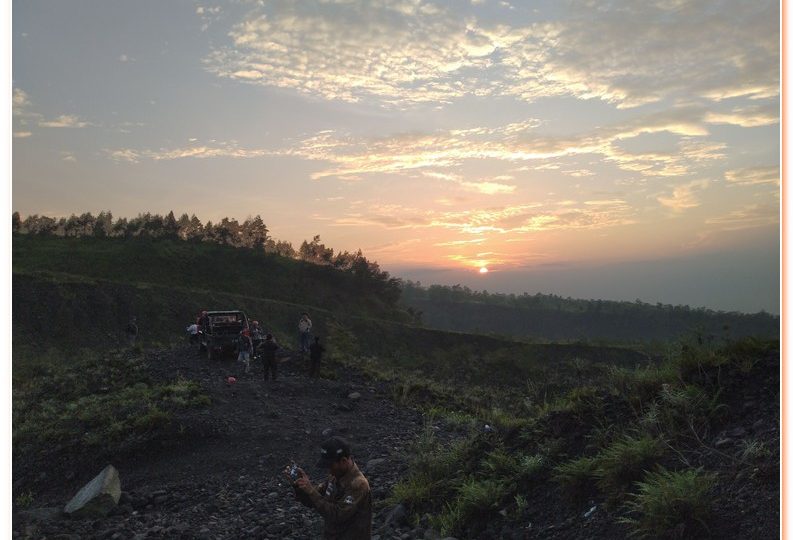 Trekking up most active Merapi volcano – While the sheer view of the majestic Mount Merapi is already a splendor in itself, the thrill of conquering the most active volcano in Indonesia truly offers its own special sensation.

Basically there are two routes leading to the summit, the Kaliurang track from the south and the Selo Village Track from the north. Although Kaliurang is only a short drive from the city of Yogyakarta, but hikers are banned from using this route since it is regarded too dangerous. Thus, Selo Village has become the new ‘basecamp’ for Merapi Mountain Hiking.

Situated 1,560 meters above sea level at the foot of Mount Merapi and Mount Merbabu, Selo village is administratively located within the Boyolali Regency, in the province of Central Java, aproximately 80 Kilometers from downtown Yogyakarta. For the fit and healthy, from Selo it’s a 3 hour hike to the summit of Mount Merapi, for others it will take 4 hours plus to climb, and nearly the same time for the descent. Most hikers start at midnight, or just after, in order to reach the summit before the first light of dawn. This is because Merapi generally emits more gases as the day goes on, so early morning is the safest time to visit.

Upon arriving at Selo, passing the entrance gate of the village, hikers will be greeted with the big sign saying: “NEW SELO” which is the starting point for the hike. Hikers’ basecamp to gather and prepare for their trip is located before the start of the trail on the left. The basecamp is also the first climbing post where Guide services are available.

For the first 30 minutes beyond the sign, the path follows a rather steep track through large plantations with a deep drop to the left. This small path can be very dusty during the dry season, but it still offers plenty of grips on the way up. By the time the last fields are left behind at an altitude of around 2,000 meters, gradually forest trees become smaller and grow further apart, and with it, the surroundings offer terrific views back down the trail. As the woods become sparser the path starts to gradually grow rockier. Passing the national park sign, it will take approximately 45 minutes of good hard uphill climb before reaching Post 1 at an altitude of 2,150m. After a comfortable 30 to 40 minutes hike, the next point is reached. The many memorial plates here (at around 2,400m asl) are reminders that the utmost care must be taken when getting to the top of this very active volcano.

From here the path actually leads downhill for a short 300-400 metres before ascending steeply to a large new monument (built in 2011). Subsequently, it is a just a five minutes’ stroll to the middle of a huge boulder field known as Pasar Bubrah which is often full of tents at peak hiking season or weekends. Here hikers are also presented with magnificent views of the twin cones of Mount Sumbing and Mount Sindoro.

From Pasar Bubrah the steep rocky cone of Merapi is clearly visible. It will take about a difficult 45 minutes of slipping over gravels – and avoiding rocks sent down by the person ahead – to reach the actual crater rim. It’s a very tiring section of the trail and inevitably, shoes will also be filled with small rocks and volcanic sand. As hikers reach closer to the summit, the panorama grows even more splendid with every step. To the east, hikers are presented with the magnificent view of the towering peak of Mount Lawu as it beautifully pierces the heavenly clouds.

Approaching the summit area, the grounds feel a lot warmer, and in a few areas several vents are seen blowing out piping hot volcanic steam from the mountain. From this point it will take only about 15 minutes to get to the eerie crater rim. The final 100 meters of the hike unveil an unbelievably arid scenery of scree (loose rock debris covering a slope) and huge shards of volcanic rocks deposited by the enormous 2010 eruptions.

Prior to 2006, the highest point of Mt. Merapi was a huge shard of rock called Puncak Garuda. After the 2006 eruption, however, the highest point of the volcano became part of a new lava dome, and impossible – or at least incredibly dangerous – to reach. Nevertheless, the devastating eruptions in October and November 2010 led to great changes in the shape of the summit area. There is now no longer a lava dome, and its stead is left a huge new crater.

From the rim (2,905m) are tremendous views down into the 200 meters-deep and 500 meters-wide crater. Needless to say, extreme care needs to be taken on the rim because it is a very dangerous place quite apart from the volcanic activity. Making a complete circuit of the rim is utterly impossible, however from the point at which the rim is reached, hikers can walk perhaps ten or twenty meters, both left and right. Taking the left, hikers can climb up to a flat section of the rim which arguably offers the finest views on the rim.