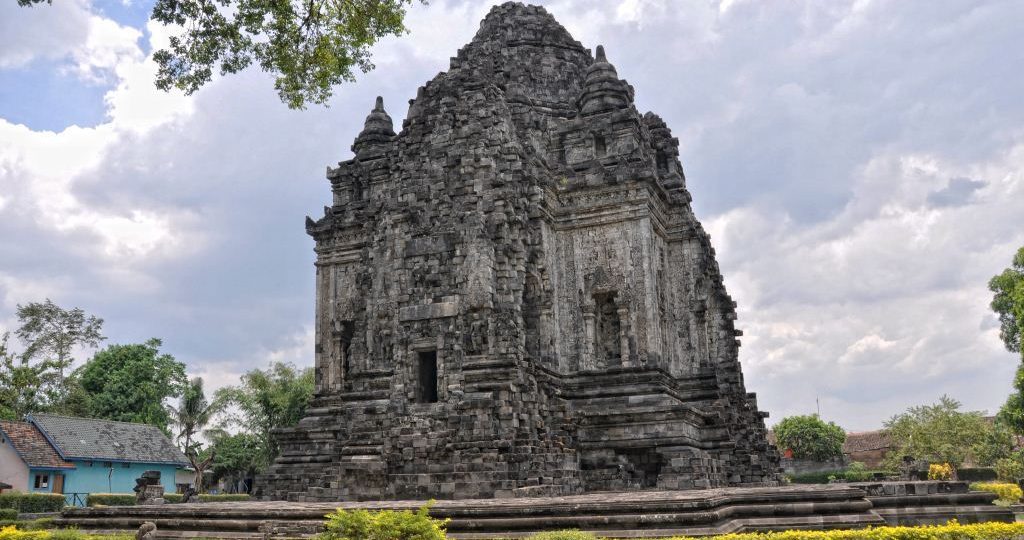 Kalasan Temple The Oldest Buddhist Temple on Java – Located on the southern main road between the cities of Yogyakarta and Solo, approximately 2 Km from the Prambanan Temple compound, is Candi Kalasan, believed to be the oldest Buddhist temple in Central Java and Yogyakarta, even predating the colossal Borobudur Temple in Magelang.

Administratively , the Kalasan Temple is situated in the Kali Bening area, in the Tirtomantani Village, Kalasan Sub-District, Sleman regency, in the Province of Yogyakarta.

The Kalasan inscription found near the temple indicates that it was completed in the Saka year 700 Saka or 778 AD. Written in Sanskrit using Pranagari script, the inscription mentions that the temple was erected on the behest of Guru Sang Raja Sailendravamçatilaka (the Jewel of the Sailendra dynasty) who succeeded to persuade Maharaja Tejapurnapana Panangkaran (in another part of the inscription also called Kariyana Panangkaran) to construct a holy building for the goddess (boddhisattvadevi) Tara and also to build a vihara ( or monastery) for Buddhist monks from the Sailendra royal families. Thus the temple was also known as the Temple of Tara.

The Kalasan temple is richly decorated with Buddhist figures

The temple stands on a 45×45 meters rectangular base. Each of the four main cardinal points has stairs and gates adorned with Kala-Makara and also rooms measuring 3.5 square meters. No statue is found in the smaller room facing north, west, and south; but the lotus pedestals suggest that the rooms once must have contained statues of bodhisattvas. The temple is richly decorated with Buddhist figures such as the Bodhisattva and Gana. The Kala Figure above the southern door has been photographed and used by a many foreign academics in their books to give an idea of the skillful art in stone carving of Central Javanese artists some millennia ago. Niches where the statues would have been placed are found inside and outside the temple. The niches that adorn the outer wall are intricately carved with Kala figures, gods and divinities in a scene of the svargaloka, the celestial palace abode of the gods, apsaras, and gandharvas.

Feature of The Kalasan temple is its octagon-shaped roof

One notable feature of the temple is its octagon-shaped roof, which features carved images of the Tathagatas/Buddha facing the four cardinal points, each of which is flanked by a pair of bodhisattvas in bas-relief. It has been suggested that the bodhisattvas on the upper part of the Kalasan temple represent the famous Eight Great Bodhisattvas of Mahayana Buddhism. The octagonal aspect of the structure has led to speculations of non-Buddhist elements in the temple, similar to some interpretations in the early Borobudur structure.

The Candi Kalasan faces east, with the east room also serving as the access to the main central room. In the larger main room there is a lotus pedestal and a throne carved with makara, lion, and elephant figures, similar to the Buddha Vairocana throne found in the Mendut temple. According to the Kalasan inscription, the temple once housed the large (probably reaching 4 meters tall) statue of the Boddhisattvadevi Tara. From the design of the throne, it is most likely that the statue of the goddess was in a seated position and was made of bronze.

The Kalasan temple is located in the archaeologically rich Prambanan valley

Kalasan temple is located in the archaeologically rich Prambanan valley. Just a few hundred meters north east of Kalasan one will find the Sari Temple (or Candi Sari) which was most probably the monastery mentioned in the Kalasan inscription. Further east lies the Prambanan Temples complex, the Sewu temple complex, and the Plaosan temple.