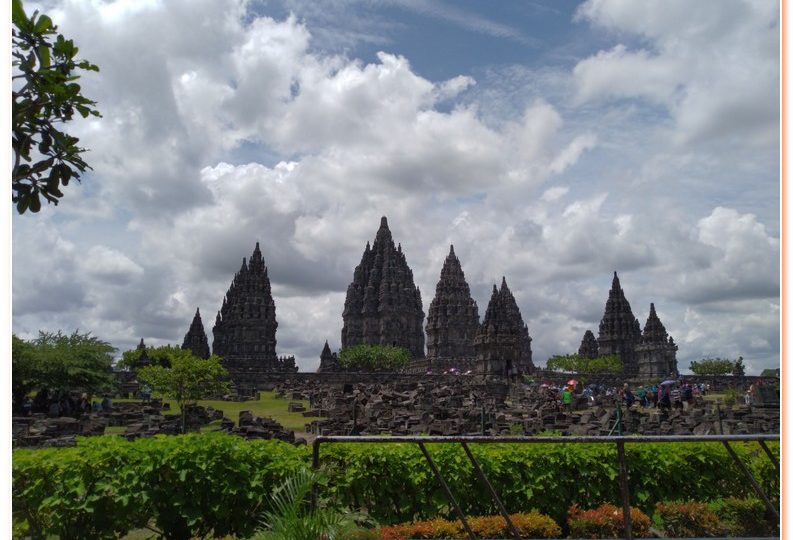 Prambanan Temple The Exotic Hindu Temple. As the largest Hindu temple in Southeast Asia, the beautiful and graceful temple of Prambanan is a magnificent spectacle and an icon of Indonesia’s cultural heritage.

Located not far from the Buddhist Borobudur temple, the proximity of the two temples tells us that on Java, Buddhism and Hinduism lived peacefully next to one another.

Prambanan is known locally as Roro Jonggrang, coming from the legend of the ‘slender virgin’. According to the legend once upon a time, there was a young and powerful man named Bandung Bondowoso. He wanted to marry a beautiful princess named Roro Jonggrang. Her father, the king, agreed and forced her to marry Bandung Bondowoso. Butm Sita did not love him yet could not refuse him.

After careful consideration, she thought of a way to refuse Bondowoso, whose magical power was well-known. She decided she would agree but only if Bondowoso built 1,000 temples in one night before the break of dawn.

She insisted that the work must be completed before the rooster crowed, something she believed was impossible. But with the help of genies and his own magical powers, Bondowoso managed to complete 999 temples. Panicked, Jonggrang told the women of her village to start pounding rice so that the rooster would wake up and begin to crow. When Bondowoso heard this he was deeply disappointed and wildly enraged. When he found out that Roro Jonggrang had made the roosters crow, he turned her into stone, The statue of a slender virgin graces the main Prambanan temple, while a group of temples nearby is called the Candi Sewu or the Thousand Temples.

Prambanan Temple is dedicated to Shiva

The temples at Prambanan were built in the 9th century. The biggest temple is dedicated to Shiva – the destroyer, and the two smaller ones which sit on its right and left are dedicated to Brahma -¬ the creator and Wisnhu – the sustainer. The tallest temple of Prambanan is a staggering 47 meters high. Its peak visible from far away and rises high above the ruins of the other temples.

After hundreds of years of neglect, the Prambanan temple was rediscovered by CA Lons, a Dutchman, in 1733. Since then, this temple has been revitalized and today is widely regarded as the most beautiful and graceful Hindu temple in Indonesia.

The grandeur, complexity, and integrated architectural concept of Prambanan makes this a truly amazing structure. As a unique cultural and architectural marvel, Prambanan was declared a World Heritage site in 1991 by UNESCO.

Candi Sewu – just 10-15 minutes walk from the Prambanan temple, it is worth a visit as the temple ruins is eerily captivating and as a good respite from the crowds in Prambanan.

Candi Sambisari – a good stopover temple on the way to Prambanan, it had been buried underground for more hundred years before discovery in 1966. Reconstructed, it now stands as a testament to archeologists efforts to restore the glory of the past.

Borobudur Temple Compounds – A 9th century Buddhist temple is the largest Buddhist structure in the world and is an Indonesia UNESCO Heritage site. It consists of six square platforms with 2,672 relief panels and 504 Buddha status.

Yogyakarta – packed with all the intricacies of a good travel place with hidden treasures of bygone days, narrow alleys and main streets of delights, large array of delicious food to try, arts and cultures dotted everywhere and rich in history.