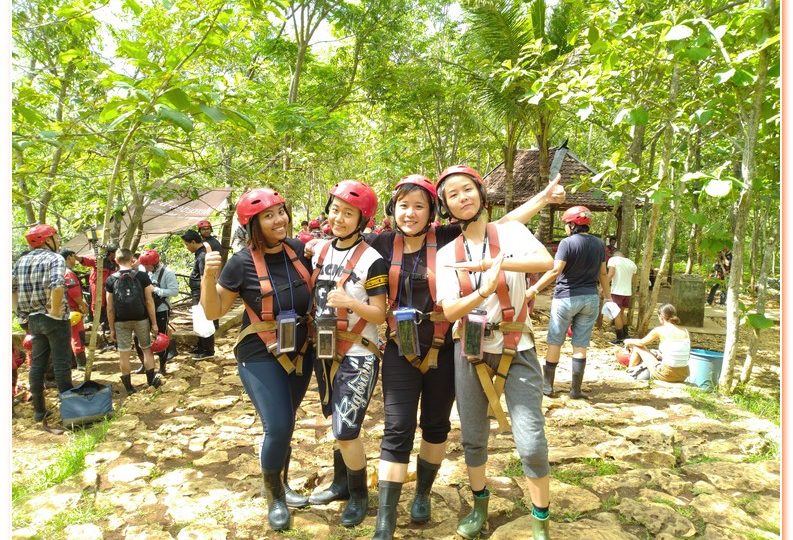 The deep Jomblang Vertical Cave – Caving Adventure Yogya – Aside from rich and well preserved cultural heritages, the charming royal city of Yogyakarta is also surrounded by loads of natural splendors. From the majestic volcano of Mount Merapi to the shores of Parangtritis Beach on the mystical southern coast of Java, this lush area is decorated with various beautiful nature artworks. Secluded amongst the Sewu Karst Mountain range that stretches from Gombong Regency in Central Java to Pacitan Regency in East Java, lies a cave that offers not only magnificent sceneries but also exciting adventure: the Jomblang Cave.

Located in Jetis Wetan Village, Semanu Sub-district, Gunung Kidul Regency, in the Special Province of Yogyakarta, Jomblang Cave is 50Km away from downtown Yogyakarta, or about 10Km from Wonosari, capital town of the Gunungkidul Regency. While it may not be that familiar for common tourists, among cave enthusiasts, nature trekkers and backpackers the cave has gained popularity for its outstanding beauty. In 2011, the cave was further introduced to the world as it made an appearance as one of the sites on the CBS TV reality game show, The Amazing Race.

The cave is a vertical collapse doline type which was formed by the geological process when the soil and all vegetations on it plunged beneath the surface of the earth some thousands of years ago. The collapse created a sinkhole of approximately 50 meters in diameter which became the mouth of the cave. The sinkhole is known to locals as “Luweng”, thus the cave is also known locally as Luweng Jomblang.

To descend down Jomblang Cave, one must have sufficient caving ability, particularly the Single Rope Technique (SRT) or using single rope to ascend and descend vertically. However for beginners or those with little caving experiences, there are many professional cavers who can guide and assist to reach the floor of the cave. Cavers can choose from 4 different tracks with varying heights. The first is known as the VIP track which features 15 meters of a “walkable” steep slope followed by about 20 meters SRT descend. This track is known as the most common and easiest, hence the name VIP. Other 3 tracks present higher challenges since visitors must descend the SRT line from higher altitudes: 80 meters for track A, 60 meters for Track B, and 40 meters for track C.

While the trip down to the bottom of the cave offers more than unforgettable adventure, the grand prize awaits down below at the bottom of the cave. Since sunshine can still penetrate the floor of the cave, amazingly one can find lush large trees and also mosses, ferns, and shrubs decorating the cave’s interior. This so called primeval forest is formed by the initial vegetations that continue to grow after its plunge episode and have attained great age without significant disturbance, thereby exhibiting unique ecological features.

More fascination awaits at the base of Grubug Cave

500 meters away from the base of Jomblang through the natural corridor, more fascination awaits at the base of Grubug Cave. Here, two huge green-brownish stalagmites stand fascinatingly on the cave’s floor. Around high noon, the sunshine penetrating the eternal darkness creates an amazing spectacle that is unlikely found elsewhere. The beautiful ray of light from the top of the cave that illuminates stalactites and stalagmites as well as the cave floor is so fascinating that some even call it heavenly light.

North to the stalagmite boulder one can find an underwater river. During the dry season, one can explore this river by using rubber boat following the current. The river connects the base of Grubug Cave with several other caves within the Karst Mountain Range. However, during the wet season the current tends to be strong and the water level significantly increases. Thus, boating in the wet season is not advisable.

1. The best time to enjoy the magnificent view of the Jomblang and Grubug Caves are from 10.00 to 12.00 Western Indonesia Time, since this is when the sun is at its highest point and creates the perfect rays inside the cave. Make sure you arrange your trip to get there on time.
2. The maximum amount of people allowed inside Jomblang Cave at one time is 25. This is aimed to preserve the stability of the cave’s ecosystem and condition.
3. Anyone who wishes to enter the cave must use appropriate equipments which meet the safety standards of caving. They also need to be accompanied by experienced professional cavers.
4. For more information on Caving in Jomblang, you can contact the official of Jomblang Resort, Agus Rohmad / Java Heritage Tour  (Phone: +62 819 1553 4286 )