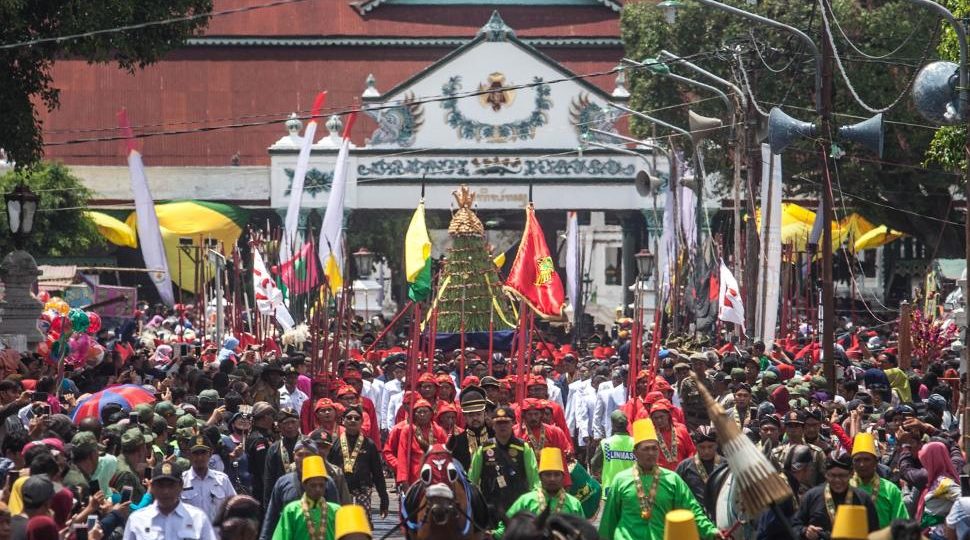 The Keraton is the Reflection of Javanese Culture –  The palace of Yogyakarta, known as the Keraton (also spelled kraton or karaton), is a grand complex that was meticulously planned to reflect the Javanese cosmos. This splendid example of traditional Javanese architecture has no equal. Designed and built in stages, the Keraton was completed in 1790.

This elegant complex of pavilions was constructed entirely on ancient beliefs and each feature of the complex, from the courtyards to the trees, has a special symbolic meaning related to sophisticated Javanese world view.

The Keraton is built facing directly north towards the majestic Mt. Merapi with to its south backing the Indian Ocean which is believed to be the abode of Kanjeng Ratu Loro Kidul, the Queen of the South Seas and the mystical consort of the Sultan. Malioboro road was originally used as the ceremonial route, not unlike London’s Pall Mall, and forms a straight line drawn from the Sultan’s palace to the Merapi volcano.

A green square called alun-alun fronting the palace, has a large banyan tree in its center, while behind the palace is another similar square. When a sultan dies, the cortege leaves by the southern gate on its way to the cemetery of kings at Imogiri.

This palace was designed to be more than just a royal residence. It was built to be a focal point of the Sultan’s entire kingdom. Today, the Keraton is a piece of living history and tradition. It continues to be used, both as a home of the Sultan as well as for other important ceremonial and cultural functions of the Yogya court.

The present Sultan Hamengku Buwono X of Yogyakarta retains the title of Sultan although Yogya has become one of the provinces of the Republic of Indonesia. The Sultan of Yogya,is also the governor of the province, and is still considered the cultural head of this region, and is greatly loved by his subjects.

Even with Yogya’s modernization, the Keraton of Yogya continues to be respected by the people of Yogya, steeped as it is in mysticism and philosophy. In the afternoons, after the palace is closed to visitors, women in traditional costume can be seen respectfully sprinkling water and flowers on the pillars, lighting incense to “cleanse” the keraton from evil spirits.

Things to do in Keraton Yogyakarta

Walk around this ancient palace and take in the intricate details of this royal complex. The price of admission includes a guided tour (available in English and other languages). When you enter the palace itself, you will escape from the heat and crowds of the city and step into a cool and serene place a world away from the chaos of the outside world. Visitors will enjoy the peaceful atmosphere here as they wander around the palace grounds. At the main entryway you will see an enormous barrier or baturana designed to keep out evil spirits.

This works because it’s believed that spirits find it difficult to turn corners and prefer to travel in straight lines. As you first approach the palace visitors walk through a pavilion or Pagelaran where the sultan’s ministers and troops used to formally assemble. Today this space is used for musical and theatrical performances on special occasions such as the Sultan’s birthday. Behind the first pavilion is the Siti Hinggil or ‘Elevated Ground’, where royal coronations take place. Imagine the life of a prospective Sultan as he would stand here anxiously waiting to be crownedMost of the pavilions, or “pendopo” are largely open air structures, supported by ornately carved pillars.

One of the most impressive structures in the palace yogyakarta

One of the most impressive structures here is the splendid Bangsal Kencono or ‘golden throne pavilion’. This majestic structure is an excellent example of Javanese artistry and reflects the religious and cultural diversity of the region. The roof of the pavilion is decorated in a red Hindu pattern, with gold Buddhist lotus petals at the base, while the pillars are decorated in green and gold Arabic calligraphy quoting the Quran. On the southern and eastern sides of the courtyard is a series of multi-purpose rooms.

One of these rooms is used to prepare the Sultan’s daily tea. If you’re lucky you may see a mid morning processions of elderly female retainers leaving from here bearing tea under royal umbrellas. Another pavilion was used as the court of justice, where trials were held. And everywhere you will see men and women in traditional costumes walking and sitting around, These are the court retinue and guards. You will not find any military guards here, since the Keraton is believed to be protected by invisible powers.

Before you leave, take a look at the royal carriages on display at the Rotowijayan stables. Many of these ornate and elaborate carriages were gifts, made in Europe and presented to sultans by Dutch patrons. Some of these carriages have special functions such as the Kyai Rotopraloyo which is a special carriage used to bear the sultan’s coffin to the royal cemetery.Access to the actual home of the present Sultan and his family, as well as to his offices, is through a separate entrance, away from the visitors’ gate.

Get Around in the Keraton Yogya

Visitors explore the palace on foot. The palace is open to visitors from 08.30 am to 12.30 pm except on Fridays and Saturdays which it closes at 11.00 am. It is closed in the afternoons.

Location of the Keraton Yogya

The Keraton is located in the centre of Yogyakarta and can be reached easily by taxi, becak, andong – the horse-drawn cart, or by public bus.

Tips during a visit at the Keraton Yogya