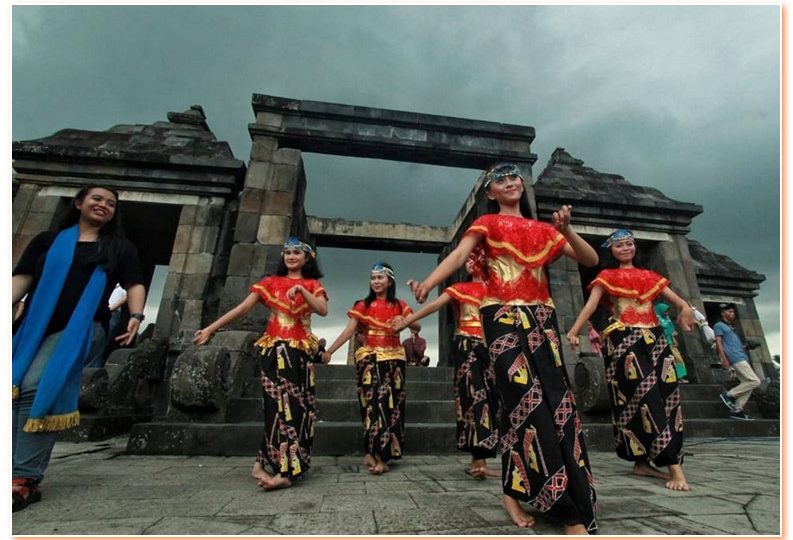 The site takes its name from the legendary king Boko, one of the main characters in the famous folk legend of “Roro Jonggrang”. This folklore links the Ratu Boko Palace with the Durga statue in the Prambanan temple, and with the Sewu temples, or the Thousand Temples near Yogyakarta.

The legend tells the story of two ancient, neighboring kingdoms on Java: Pengging and Boko. The two kingdoms continuously waged war against one another and after a series of devastating battles, Pengging finally succeeded to come out victorious. In the last battle, the Pengging Prince, Bandung Bondowoso who possessed supernatural powers, assassinated King Boko. After this victory, the Prince then asked the dead king’s daughter, named Roro Jonggrang in marriage. Roro Jonggrang, whose beauty was famed to be unmatched, posed one condition: that Bandung build her a thousand temples in one single night. With the aid of spiritual beings (genies and demons) the prince began to meditate and succeeded to build 999 temples overnight.

Fearing for the worst, Roro Jonggrang then woke up her palace maidens and ordered them to begin pounding the rice. This awoke the roosters, who began to crow, normally announcing the arrival of dawn. Hearing the sounds of the morning, and believing that the sun was about to rise, the genies disappeared into the ground. Thus the prince was unable to fulfil the demand of the princess. Feeling deceived, and in revenge he cursed the princess and turned her into a stone statue.

Following this legend, therefore, the statue of the goddess Durga that stands in the north cell of the Shiva temple at Prambanan, is in fact the princess of Boko, and until this day it is called the Roro Jonggrang or the “Slender Virgin”.

According to writer HJ. DeGraff, in the 17th century there were many European travelers to Java, who mentioned that there existed an archeological site which related of certain King or Prabu/Ratu Boko who came from Bali. In 1790, Dutch Researcher, Van Boeckholtz was the first to discover the ruins of the present day Ratu Boko Palace Complex. The publication of the discovery attracted scientists such as Makenzie, Junghun, and Brumun to conduct research and exploration on the site in the year 1814. In the early 20th century, the Ratu Boko site was thoroughly studied by researcher FDK Bosch, who published his findings in a report entitled “Keraton Van Ratoe Boko”. During theses researches, Mackenzie also found a statue of gold-headed man and woman embracing each other. A stone pillar with ornaments of zoomorphic figures among which are elephants, horses, and others, also found among the ruins.

The history of Ratu Boko is unclear

The history of Ratu Boko is unclear, and much of what is understood about the site comes from inscriptions and even folklore. The oldest inscriptions found on the site is believed to date back to 792 AD, naming the site Abhayagiri Wihara.

Archaeologists believe that the ruler of the Saliendra Dynasty Rakai Panangkaran, built the palace of Ratu Boko between 760-780, after he relinquished hi throne. It was then tradition among ancient kingdoms for ageing kings to retire in order to find spiritual peace and concentrate on religious matters. Thus, the Abhayagiri Wihara meaning ‘peaceful Buddhist monastery’ was built on this site with its spectacular view.

Ratu Boko stands 196 m above sea level and covers an area of 250.000 square meters . It is divided into four parts, the center, the west, the southeast and the east. The central section of the temple consists of the main gates, a crematorium temple, a pool, a stone pedestal and the paseban (or audience hall). The southeast part covers the pendopo (attached open veranda which serves as an audience hall), balai-balai (public hall or building), three temples, a pool and a harem complex. In this part there is also a well called the Amerta Mantana which literally means “holy water”. It is believed that the well water had a virtue to bring luck to those who drink it. On the east side, there are a cave complex, a Buddha stupa and a pool. Many of its original constructions which were made of wood were destroyed through the ages.

Hindu elements also decorate the complex, such as the Lingga and Yoni statue, a statue of Ganesha, and a golden plate on which is inscribed “Om Rudra ya namah swaha”. The golden plate implies the veneration to lord Rudra, the other name for Shiva. This signifies that Rakai Panangkaran, the temple initiator who was Buddhist, still highly respected his people who were mostly of Hindu religion.

At the exact location called the Plaza Andrawina, is where the Ratu Boko Temple Complex radiates its finest splendor at moments when the sun rises and sets over the horizon.