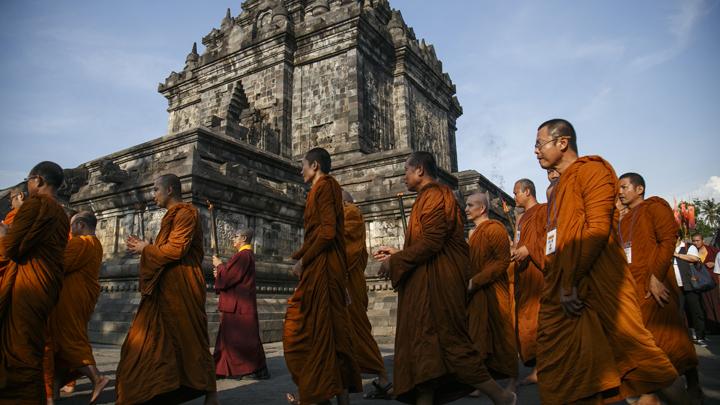 Mendut Temple: Spiritual Portal to the imposing Borobudur temple – The small Buddhist Mendut Temple in Central Java forms an inseparable part of a pilgrim’s progress to the mighty Borobudur temple. Serving as an introductory portal before ascending the Borobudur temple, Mendut has an array of narrative reliefs and most important Buddha statues that spiritually prepare pious pilgrims and the general visitors for their journey to the top of Buddhism’s cosmic mountain at Borobudur. The temple itself is located in the village of Mendut in the Magelang Regency in Central Java.

the temple is on a north to south straight line with the Borobudur and Pawon Temples. Local legend relates that long ago a brick-paved road led from Mendut to Borobudur, closed in by walls with niches built into them. According to Dutch archaeologist JG de Casparis, the temple forms part of a once huge temple complex together with the Pawon and Borobudur temples and, chronologically speaking, is the oldest among the three.

Mendut temple was built and completed during the reign of King Indra of Sailendra dynasty.

According to a Karangtengah inscription, the temple was built and completed during the reign of King Indra of Sailendra dynasty. The inscription dated 824 AD mentions that King Indra of Sailendra built a sacred monument named Venuvana which means “bamboo forest”. Casparis connected the temple mentioned in the Karangtengah inscription with the Mendut temple and Bhiku Sri Pannyavaro Mahethera, in the documentary movie entitled “The forgotten gems, Buddhists Temples in Java” mentioned that the original name of the Temple was Venuvana Mandira meaning “The Palace in the Bamboo Forest”.

The 26.4 meters tall temple faces northwest. The stairs projecting from its northwest’ side square elevated base is adorned with a Makara statue on either side. The side of the stair wall is carved with bas-relief of the Jataka fable narrating the animal story of Buddhist teaching. While the square terrace surrounding the body of the temple is meant for pradakshina or the ritual of circumambulation, walking clockwise around the temple. The outer walls are adorned with bas-reliefs of Bodhisatvas (Buddhist divinities), such as Avalokitesvara, Maitreya, Cunda, Ksitigarbha, Samantabhadra, Mahakarunika Avalokitesvara, Vajrapani, Manjusri, Akasagarbha, and Boddhisattvadevi Prajnaparamita among other Buddhist figures. Originally the temple had two chambers, a small chamber in the front, and the large main chamber in the center. The roof and some parts of the front chamber walls are now missing. The inner wall of the front chamber is adorned with bas-relief of Hariti surrounds by children, Atavaka on the other side, Kalpataru, also groups of devatas divinities flying in heaven.

The main chamber houses three beautifully carved large stone statues. The three statues are the Buddhist main divinities revered at Mendut which can explain the spiritual purpose of the establishment of this temple. At the center of the chamber is a grand 3 meter tall stone statue of Dhyani Buddha Cakyamuni or Dhyani Buddha Vairocana facing west, sitting in the dharma Cakra Mudra hand position (turning the wheel of Dharma). This central statue is believed to symbolize the turning of the wheels of all life on earth.
On the right of the central statue is the Boddhisatva Avalokitesvara in a seated position with the left leg crossed, while the right leg touches the ground. The hand position is varamudra which illustrates the Buddha delivering his teachings. The statue portrays Buddha in his grand costume complete with the jewelries and wearing a crown.

For Buddhists in Indonesia and abroad, the Mendut temple holds special significance. The existence of the three gigantic Buddha statues holds its own fascinating beauty both as sacred monuments and as works of art. The three statues sitting in the temple are still considered to radiate an aura of blessedness. Today, the temple is visited by many visitors and Buddhists pilgrims from around the world before proceeding to Borobudur. Mendut Temple also becomes the staging point for the annual ritual ceremony of Vesak, where the holly waters from the pristine springs of Jumprit and the torch with the natural eternal flames at Mrapen are kept, before the monks and congregations conduct their ritual procession from Mendut to Borobudur.