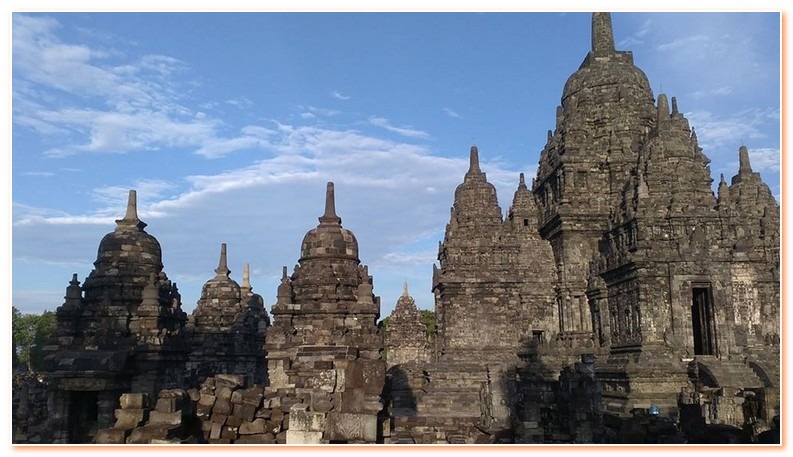 Sewu temple is an 8th-century Mahayana Buddhist temple located 800 meters north of Prambanan in Central Java. Candi Sewu is actually the second largest Buddhist Temple complex in Indonesia after Borobudur and predates nearby “Loro Jonggrang” temple at Prambanan. Although the complex consists of 249 temples, the name in Javanese translates to ‘a thousand temples,’ which originated from popular local folklore; The Legend of Loro Jonggrang. The original name of this temple compound is probably Manjusrigrha.

According to the Kelurak inscription (dated from 782 CE) and Manjusrigrha inscription (dated from 792 CE),[1]:89 which was found in 1960, the original name of the temple complex was probably “Manjusri grha” (The House of Manjusri). Manjusri is a Bodhisattva in Mahayana Buddhist teaching symbolizing the “Gentle Glory” of transcendent wisdom (Sanskrit: prajñā). Sewu Temple was built by the end of 8th century at the end of Rakai Panangkaran’s reign and completed during the reign his successor King Indra. Rakai Panangkaran (746—780 CE) was famous as a devoted Mahayana Buddhist King that ruled the Medang Mataram Kingdom.

The Manjusrigrha temple was the largest Buddhist temple built in Prambanan Plain region, predates the nearby Prambanan Shivaist temple by over 70 years, and predates Borobudur for about 37 years. Located in the heartland of Mataram, the temple was the royal Buddhist temple of the kingdom that regularly held stately religious ceremonies. The Manjusrigrha inscription (792) praised the perfect beauty of the prasada (tower) of this temple compound. The Bubrah temple located about several hundred meters south and the Gana temple located east from Sewu temple are probably served as guardian temples of Manjusrigrha complex, guarding four cardinal directions of Sewu temple. The ruins of Lor temple in the north and Kulon temple in the west side of Sewu temple are both in poor condition as only a few stones remain at those sites. Prior to the construction of Borobudur and Prambanan, this temple probably served as kingdom’s main temple. The temples are arranged in mandala lay out, symbolyzing universe in Buddhist cosmology.

The temple was probably expanded and completed during Rakai Pikatan’s rule, a prince whom married to a Buddhist princess of Sailendra dynasty, Pramodhawardhani. Most of his subjects retained their old religion after the court returned to favour Hinduism. The proximity of the temple to Prambanan Temple, which is a Hindu Temple, suggests that the Hindus and Buddhist lived in harmony in the era that the temples were built. The scale of the temple complex suggests Candi Sewu was a Royal Buddhist Temple and was an important religious site of the past. The temple is located on the Prambanan Plain, that is between the southern eastern slopes of Merapi volcano and the Sewu mountain range in the south, near the present border of the Yogyakarta province and Klaten Regency, in Central Java. The plain houses many archaeological sites scattered only a few miles away, suggesting that this area was an important religious, political, and urban center.