Skip to content (Press Enter)
Home>Blog>Explore Jogja>PURA MANGKUNEGARAN: its history and the end of the united Javanese Mataram Sultanate 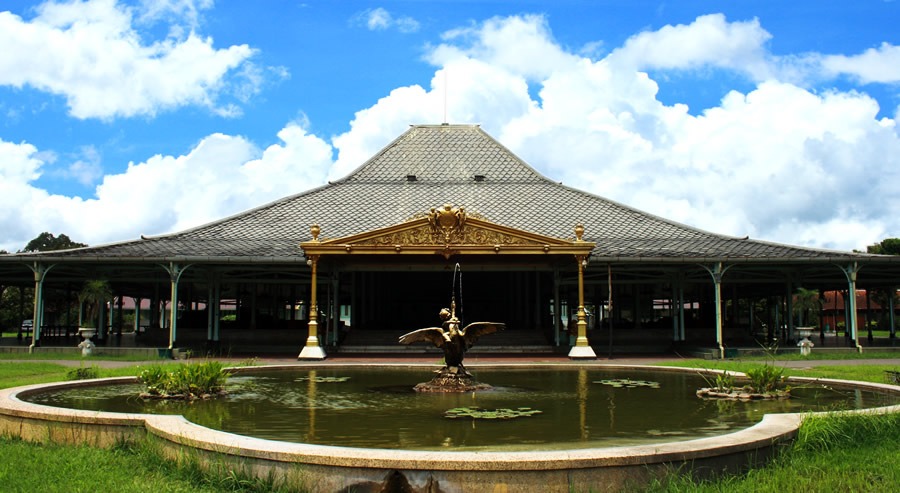 Pura Mangkunegaran – its history and the end of the united Javanese Mataram Sultanate .Standing in the northern part of the royal city of Solo in Central Java is the Mangkunegaran Palace, an exquisite representation of Javanese valor and determination against injustice, oppression and colonialsm. The palace is known as puri or pura (pronounced as “puro” in Javanese) and not the usual Javanese term “Keraton” for a palace, since politically it was not that of the ruling house, but was an independent kadipaten or district. Therefore, it bears slightly different characteristics compared to other Javanese palaces. Mangkunegaran is mainly distinguished by the absence of a public square with the classic pair of Banyan trees as typically found in Javanese main cities.

“As a monument of the Mangkunegaran dynasty, the palace was built through a long historical journey that eventually shaped the political map in the aftermath of the breakup of the ancient Mataram Sultanate”

The Mangkunegaran rule in Surakarta was established through a long, bitter and intricate historical process. The seed of its establishment was planted in the late era of the Mataram Sultanate , at the arrival of Dutch forces which t created political havoc in the area.

After the death of Amangkurat IV of the Mataram Sultanatein 1726 , Mataram became overshadowed by Dutch intervention who managed to put Adipati Anom (bearing the title Pakubuwana II) to the throne, rather than the rightful heir, Prince Arya Mangkunagara who fiercely opposed the Dutch . Through cunning political moves, Arya Mangkunegara was exiled to Ceylon in 1728, and finally sent to Kaapstad at the most southern-end of Africa.

Meanwhile in 1742, a Chinese uprising, known as Geger Pacinang broke out in Batavia (present-day Jakarta) in reaction to the Chinese genocide directed by Dutch General Governor, Adriaan Valckenier.
The remaining survivals fled to take refuge east, where they ultimately joined forces with Mataram peasants who suffered a similar fate under the oppression of the Dutch as well as by their own rulers.
The oppressed Mataram peasants were led by a valiant warrior prince called Raden Mas Said, who was the son of the exiled prince Arya Mangkunegara. The combined forces managed to tear down the walls and completely destroyed the Palace at Kartasura, forcing Sultan Pakubuwana II to retreat to Ponorogo in East Java.
During this era, Raden Mas Said married Rubiyah who would ultimately become the leader of the brave female legion, and was thereafter given the title Matah Ati.

Six months later, with the aid of Dutch forces, Pakubuwana II managed to quell the uprising. But when he found the Kartasura Palace completely destroyed, the Sultan was forced to move the capital to Surakarta. His policy to directly involve Dutch forces in the war cost the sultanate to cede Mataram territory stretching from Rembang in northern Central Java all the way to Surabaya, Madiun and Madura in East Java. The policy even stripped the ruling Pakubuwana II of all his power as he became merely a Leenman or “Borrower of Dutch authorities”.

The Treaty of Giyanti and Salatiga Charter

The charter also formed a new coalition between Surakarta, Yogyakarta and Dutch forces against the relentless Raden Mas Said.
Under the Sumpah Paworing Kawula pledge: Tiji Tibeh, Mati Siji Mati Kabeh, Mukti Siji Mukti Kabeh (Death to one and Death to all, Glory to one and one Glory to all), Raden Mas Said and his forces continued his revolt against the Dutch orchestrated coalition. Three great battles were recorded during the course of 1752-1757 that dubbed Raden Mas Said as Pangeran Sambernyawa or The Prince of Life Taker, since he always brought terror and spread death in battlefields.

Taking the title Mangkunegara I, Raden Mas Said ruled over Kedaung, Matesih, Honggobayan, Sembuyan, Gunung Kidul, Northern Pajang and Kedu. He eventually set up his own palace near the Pepe River, known today as the Pura Mangkunegaran.