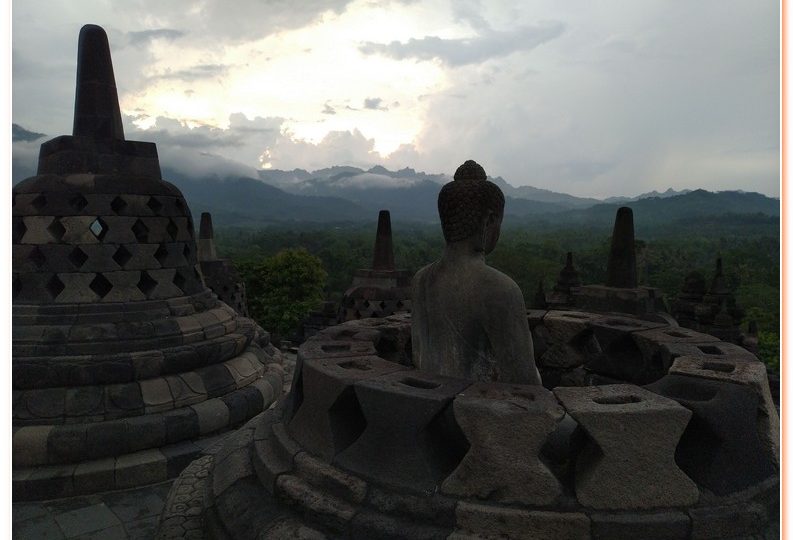 BOROBUDUR TEMPLE was built during the golden age of Syailendra Dynasty, sometime in the beginning of the 8th century.The word BOROBUDUR is believed to mean monastery on a hill. It is derived from the words baram and buduhur. Bara is from Sangskrit word Vihara meaning a complex of temples monasteries or dormitories, Beduhur is a old Javanese word meaning above. BOROBUDUR TEMPLE was built on a small hill in the Kedu Basin, a rich, fertile valley surrounded by the spectacular volcanoes. To the East lies Merapi and Merbabu and to the North lies Sumbing and Sindoro.The unsual jagged Menoreh Hills encircle the temple to South and West. The temple is also located near the meeting place of two rivers, the Elo and the Progo, these rivers are believed to be symbolic of Gangga and Yamuna, two rivers feeding the Indus valley in India. We get a sense of the grandness of the landscape when we rise to final terrace of the monument wich opens up into 360 degrees view of the magnificent valley.
The BOROBUDUR TEMPLE building is divided into three worlds according to Buddhist cosmology:
Kamadhatu (The bottom level of the BOROBUDUR TEMPLE)
The phenomenal world, the world of desires.The reliefs of base level, Kamadhatu were covered up with an extra wall before they were completely finished. There are two theories for the additional wall:
1.The entire structure began to slide and needed support.
2.Perhaps the explicit material on the reliefs was considered too revealing for the young Buddhist initiates.
During the Japanese occupation part of the wall was removed exposing reliefs from the Karmawinggha, an ancient Tibetan text that discusses good and bad deeds and their consequences.These oerticular reliefs can be reviewed on the southeast corner.
Rupadhatu (The Second Level of the BOROBUDUR TEMPLE)

A transitional sphere where humans are released from their corporeal from and worldly concerns.The Rupadhatu begins with the first terrace. Turning to the left down corridor we see on the main wall reliefs from the Lalitawistara text, a sanskrit manuscript which depicts Buddha’s life. In brief the story is as follow: Prince Shidarta, the founder of Buddhism, was born in the Lumbini garden in Nepal. His father was a great king. His mother, Maya Devi, died a week after his birth. Prince Sidarta led a very secluded life. When he reached adulthood he married Princess Gopa. One day he had a vision: he saw four figures that represented aspect of life he had never experienced or imagined: a blind old man, a sick man, a died man and a monk. Having experienced this, the Prince was inspired to leave the palace in search of wisdom. He became Wanapratha or a hermit wandeder and studied under famous teachers: Brahmani, Rudraka Aradakalapa and five famous hermits. Despite their teacher he was still unsatisfied. Prince Sidharta practised his onwn way, that is middle path or madyamika. Finally he medittated under Boddhi tree in Bodhgaya town and attained Buddhahood. After his enlightenment he was named Buddha Gautama.

In the Rupadhatu there are also small Buddha statues in niches in the balustrades of the four terrace. On the first terrace there are Manushi Buddhas who have manifested themselves in the world. Each directional point is protected by a Manushi Buddha: Knakanmuni to the South, Kacyapa to the West, Cakvanmuni to the East and Maitreya to the North. On the three highther terrace are Dyani Buddhas or meditative Buddhas. They can be distinguished from one and other by the position of their hands referred to as mudra. On the east wall: Buddha Akcobya with his palm turned down ward calling the spirit of the earth to witness his victory over evil spirits, and to witness his inner strength (Bhumisparca mudra). On the South wall: Buddha Ratnasambhawa with his palm open, showing giving blessing (Wara Mudra). On the north wall: Buddha Amogghasidha with his raised palm, showing his immunity to danger (Abhwa Mudra). On the fifth terrace: Buddha Wairocana with a circular finger gesture which indicated giving instruction with an honest and pure heart. (Witarka Mudra). In total there are 504 Buddha statues. Buddha wears a cassock consisting of there part two of wich are visible: an outer garment that leaves his right shoulder bare and an undergarment that is visible at his legs.
Arupadhatu (The third level of BOROBUDUR TEMPLE)

The sphere of Gods the spere of perfection and anlightenment. As we ascend the monument, reading the stories and climbing the terraces we will pas six achways. Before the final laevel, The Arupadhatu, we must pass through a double archway between the third and fourth terrace. These are called the double gates of Nirwikala. After passing through these gates our body leaves it corporeal form. Rupadhatu and enters the world of formeless spirit, Arupadhatu. The Nirwikala is the final door leading to the supreme final reality of Buddhisme. The most achitecturally complete archway is found on the side of monument. Once we enter the Arupadahtu we experdience a more spacious and open feeling, different from the confining rectangular corridors of the terraces bellow. Before us are three circulation terraces. Geometrically arranged on terrace are 72 lattices dagobs (small stupa shaped structures) containing Buddha Vajrasatwa statues. The philosophy behind these enccased Buddha is complex and not yet fully undestood. Perhaps the lattice structure representes a seive-like boundary separating the world of form and that of formelessness. Notice that the holes on the first two terraces are diamond shaped but the last terrace hole are square. There is a legend that says if you can reach in and touch the cloth of the Buddha near the east stairway whatever you wish will come true. At the entrance of each stairway there are two mythical lion stautues that serve as guards. No lions ever actually existed in Java. The symbole of Prince Sidharta’s kingdom in Nepal was the Lion.
Now BOROBUDUR TEMPLE although is not one of the world seven wonders anymore, but for the Indonesian, especially for Javanese peoples, the BOROBUDUR TEMPLE is still immortalized as only a great wonder now and forever as dignity symbole of the javanese civilization.