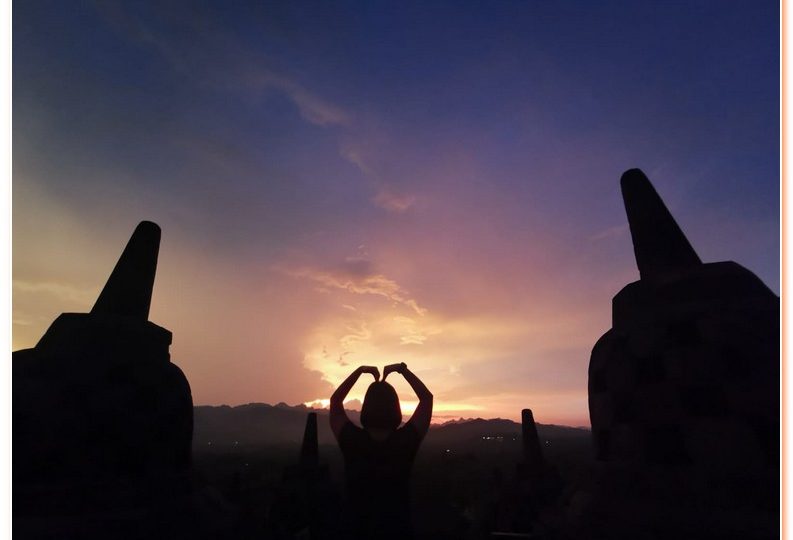 Borobudur Temple There can be only ONE – It’s a fact that there will never be another Borobudor, and it’s truly spectacular. It’s very well-kept. With passing of time, and the fact that it was bombed by extremists more than a decade ago, Borobudor is still standing. Metaphorically, this is a testament to the values of people here in Indonesia particularly in Java. Javanese here are tolerant and accepting. It’s common here to see mosques that are built with Hindu architectural cues, and you would get to see Chinese Temple being placed next to a mosque. It’s simply a way-of-life here. Back to Borobudor, as you walked around the Buddha statues, you would also get to see murals of the origin of Buddha, and also about the story of Java itself.

Some of the statues at the Temple happened to be Chinese traders that came to this shore centuries ago! It’s been said that Borobudor is discovered by Sir Stamford Raffles, but local people would say to you logically that local villagers have known the Temple all along, and it so happened that when Stamford Raffles was the Governor of Java that he wrote a story about it. The reality of the matter is that he never actually visited the site but his assistant. Standing on the pinnacle of Borobudor, I tried to imagine the Kingdoms that had come and gone. Java is such a melting pot of cultures and it’s an assuring thing talking to the locals, of their proclaimation of affection for it despite that it’s a non-Muslim relic (unlike the Buddha statue that’s been bombed into pieces at Bamiyan).

BorobudurTemple is to give you a condense historical lesson of Java

To visit Borobudur is to give you a condense historical lesson of Java itself. A must-do in anyone’s bucket list. Another profound thing that I have learnt from the local people is that whilst many yoga pant ladies are posing themselves meditating onsite to symbolise peace, peace according to them could be found anywhere. One aspect that might ruin your visit there would be persistent hounding of souvenir sellers that wouldn’t let you be. That being said, my ever practical guide told me that everyone’s doing their best to make a living. It happened to be the choice of souvenir sellers to do what they do, and he urged me to have more compassion (so true). Last but not least, in response to one of the reviews written here about them being stalked by Indonesian students, it’s a novelty for them to have their pictures taken with overseas visitors. Indonesians are immensely proud of their motherland, and they are appreciative when we visit Indonesia. This is their way of proclaiming their gratitude by sharing humanity with a smile, and there’s nothing wrong with it. Come here early, but during rainy reason, refrain from doing the sun rise tour because you might not get to see the sun at all. Later in the morning, school groups start coming in droves and you might need to fend off premium viewing sites from the selfies crowd!!