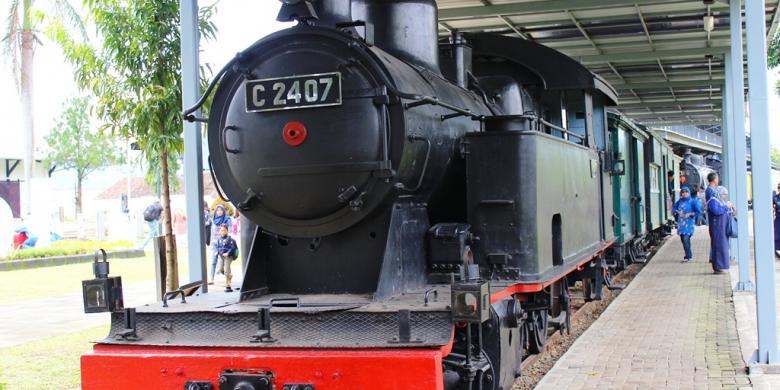 One and a half hour’s driving from Semarang on a smooth road towards Salatiga, one enjoys the true Javanese rural life all the way to the town of Ambarawa , some 17 km north from Salatiga. This is the halfway mark to Borobudur.

Here in Ambarawa you can find Indonesia’s Railway Museum, home to 21 old steam locomotives, the oldest of which is the 1891 Hartmann Chemnitz, in use until the 1970’s when the railways here were closed. Nearby is also a natural grotto to the Virgin Mary and the Stations of the Cross, surrounded by flower gardens and fish ponds.

Slightly further west in the Dieng plateau are the ancient temples known as Gedong Songo, or “the nine buildings”, constructed between 730 AD -780 AD during the Sanjaya Dynasty.

Also not far from Ambarawa are the Losari Coffee plantation and the hill town of Bandungan, favorite recreation area for people from Semarang and Yogyakarta.

But Ambarawa also has a grimmer side to its history when during World War II, the Japanese interned European families in camps here.

The existence of a marsh area here, called Rawa Pening, is closely related to the name of Ambarawa in the Javanese language: Amba meaning large or wide, and Rawa meaning swamps. Therefore, Ambarawa can be loosely translated as the town by a large swamp, the Rawa Pening.

Rawa Pening is a peaceful marsh area embracing four different districts located in the basin of Mount Merbabu, surrounded by mountains. These marshlands are filled with water hyacinths locally known as eceng gondok, from which people make beautiful souvenirs and handbags for export.

Taking photographs here is one of the most favorite activities especially at sunrise when the sky and the reflection of the changing colors create a very mystical atmosphere. Photographs would wait since 5 o’clock in the morning waiting for the tropical sunrise.

On May 21, 1873, the Ambarawa Railway Station was built and named the Willem I Railway Station since it was the Dutch King Willem I who ordered its development. There were two types of railways running from Ambarawa. The 4ft 8.5in gauge passing Kedungjati to the northeast, and the 3ft 6in gauge line runniing south towards Yogyakarta via Magelang. Ambarawa was a hub between the two regions having different gauge sizes.

As the operation of the 3ft 6in gauge line was planned to close down, the Ambarawa Railway Museum was built and opened on October 6th, 1976 to preserve the many locomotives and all the cars. The most important component among others in its preservation was the cog railway, or rack-and-pinion railway lines, that enabled the running train in Ambarawa to climb. The rack was placed between the running rails and pinions would function exactly on the rack so that the train could run on a steep inclining slope.

The rack can today still be seen along the line between Jambu and Secang. Another such line in Indonesia can be found in Sawahlunto, West Sumatra.The town of Ambarawa is 474 meter above sea level, while Jambu is 478 meters, passing Bedono at a 711 meter altitude at a less than 5 kilometers distance. The line then descends to Secang at 466 meters above sea level. Most of the lines were closed in the 1970s with the development of better road systems between Semarang and Yogyakarta that made railways a slow option. Nowadays a small number are still operational for tourists and charters during the dry season from June to August.

Children at villages would come and cheer the train as it passes by. It’s quite a spectacle for both passengers and villagers. As a travel writer, Phillips Game put it, it’s the ‘Queen of the Mountain’.

Today, the Ambarawa Railway Museum preserves 21 steam locomotives, with four still operational. Among the steam locomotives are two B25 0-4-2T B2502/3, from the original fleet of five used by the line around 100 years ago. A B2501 is now preserved in a nearby town’s park. The rest are the E10 0-10-0T E1060 that was once used in West Sumatra’s Sawahlunto, and the 2-6-0T C1218, a conventional locomotive. Old furniture, telephones, and train signals and bells are also part of the collection that could reveal exciting stories about old Java adventures.

For more information on rates to ride the train, here is the address of the Museum Kereta Api Ambarawa (Ambarawa Railway Museum): Jalan Setasiun no. 1, Ambarawa. Phone: +62 298 91 035.
Agro-tourism of Tlogo

There are around 20 cottages and 16 rented rooms available for those who wish to immerse themsleves in the life of real Javanese villagers. The village is set on a land 400 to 675 meters above sea level, called Delik Village,located some 40 kilometers from Semarang. Experience being part of a planters’ life and observe the interesting process taking place here.

Ambarawa, at Bandungan disrtrict, also has a Hindu-Buddha temple complex called the Gedong Songo temples. Songo, meaning ‘nine’, is the number of temples at Gedong Songo that sit on the slope of Mount Ungaran, some 9 kilometers from the town’s center of Ambarawa. The temples and the surrounding mountains are in perfect harmony forming an inseparable part of the environment.

These temples were built by the Hindu Sanjaya dynasty in the 8th century, between 730 to 780 A.D. The historical timeline also shows that Ratu Shima or Queen Shimha was in power during their construction. She was known for her just and fair judgment and governance. She was a believer in the One God, Sang Hyang Widhi.

According to this belief the human body has nine orifices that need to be controlled. The Javanese call this the Babahan Hawa Sanga, the nine openings in our body that, when wisely controlled, will lead to a peaceful life as its prize.

Rediscovered in 1804 under piles of earth and tropical vegetation by Sir Thomas Stamford Raffles, the temples are scattered in 5 main clusters, with the third being the largest. Each main cluster is dedicated to the god Shiva, although Brahma and Vishnu are present at several locations.

Take a horseback ride from Candi Village to the complex to experience its natural beauty . A horse ride is IDR 50,000 or cheaper when you can bargain well.

Others
Other places of interest around Ambarawa are those related to Indonesia’s national struggle to reclaim the country from Japanese and Dutch occupation. They are the Isdiman Palagan Museum and the Willem II fort.